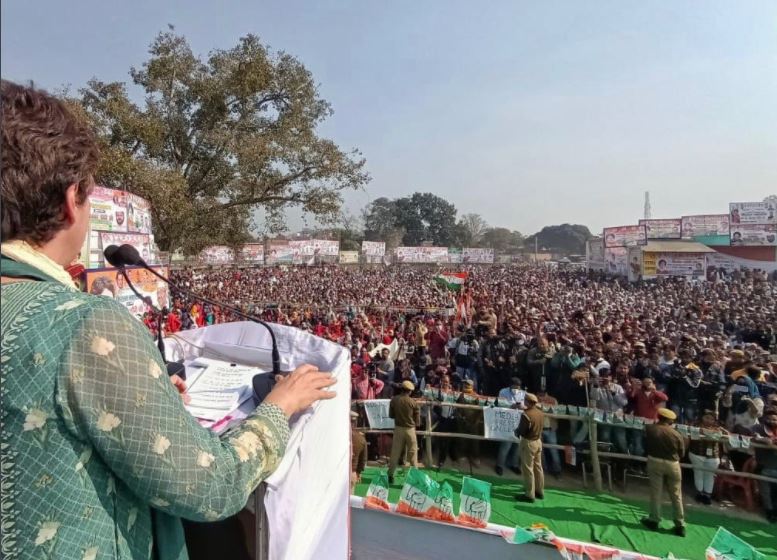 Congress’ general secretary Priyanka Gandhi Vadra on Monday addressed Kisan Mahapanchayat supporting protesting farmers in Uttar Pradesh’s Bijnor district. Referring Rahul Gandhi’s ‘hum do, hamare do’ remarks at Narendra Modi government, she alleged that all the three farm laws have not been brought in for the farmers but for PM’s capitalist friends.

Addressing Kisan Mahapanchayat, Gandhi said farmers were ridiculed in Parliament and dubbed as traitors by ministers. PM Modi has given a new name ‘Aandolanjivi’ and ‘Parijivi’ to the protesting farmers while the BJP ministers called the farmers traitors.

Listing out the failures of Centre’s three farm laws, the UP Congress in-charge said the first law gives free hand to the corporate, the second law is designed to crush the existing APMC mandis – once private mandis take over the market while the third law facilitating contract farming is instrumental in subjecting the farmers to exploitation by the corporates.

After Priyanka Gandhi’s speech, a two-minute silence was observed for the farmers who died in the protest site. The farmer unions protesting against the centre’s farm laws have claimed that over 200 farmers have been died since November.

On Thursday, congress leader Rahul Gandhi had hit out at Modi government over the farm laws in the Lok Sabha, and alleged the laws are intended to finish the farmers, small, medium businessmen and the Mandis. He had said that the country is now being run by four people with the motto ‘Hum do, hamare do’.