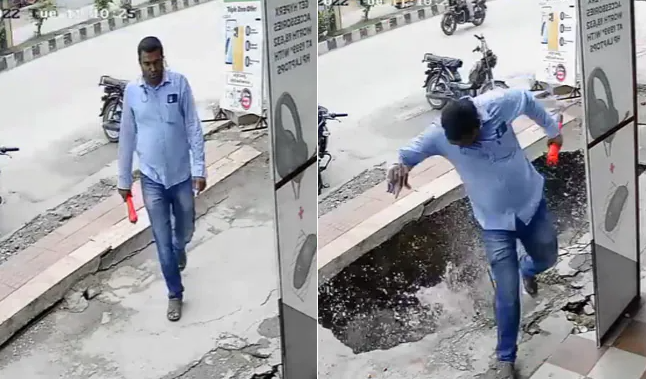 A viral video is doing rounds on all the social media platforms for the past few days, where a man can be seen skipping a major accident as he walks over a weak road surface. The clip shows that moments after the man finished walking toward what seems like a store, the concrete road get suddenly caves into the drainage below.

After witnessing the horrible accident, the man’s expression at the end of the video was enough to describe the horror on his face.

It is still not known yet from where the video has been generated. But when it went viral on social media it grabs a lot of attention from people.

As of now, the scary viral video has gained thousands of views, in no time. Internet users are also bombarded with the videos’ comment section for praising the man’s luck. One of the Twitter retweeted that video and wrote in Hindi that reads Zindagi main bus itna lucky hona hai (In my life all I want is to become as lucky as him). Another Twitter took the notes from the viral video and wrote that such a lucky incident happens when Yamraj took a long week’s vacation. The Thir users launched a sharp attack on the central government and wrote that rather than investing money in the advertisement it has no use trying to invest money on poor roads. You might get appreciation from the public, user-added in his tweet.

Meet 75-year-old Lauren Bruzzone, who is storming the internet with her intense workout videos | WATCH