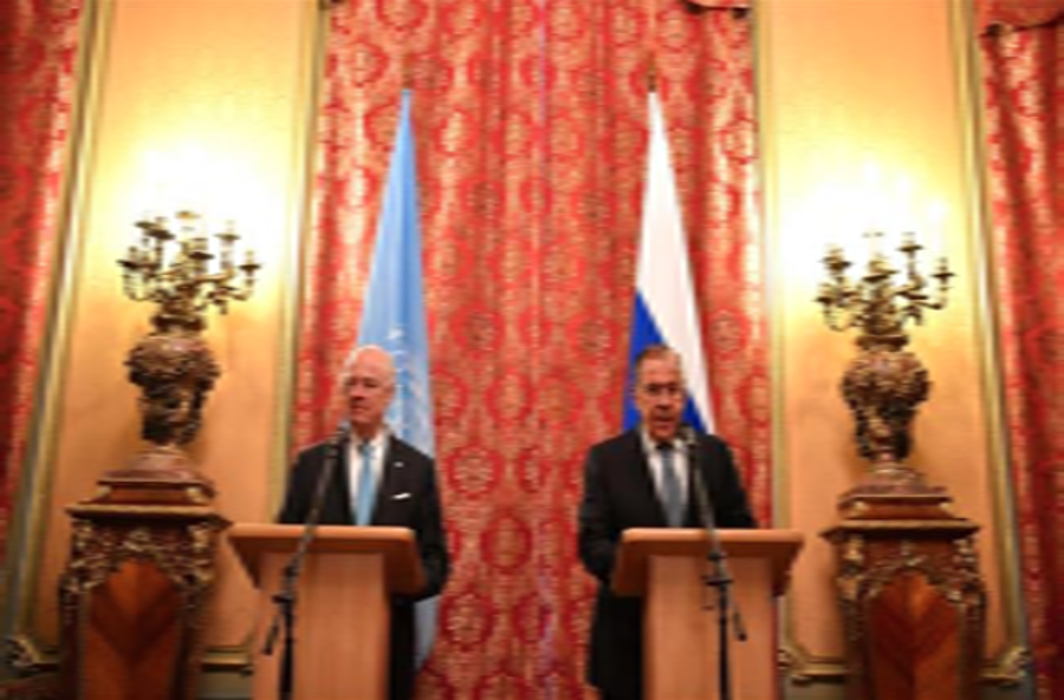 Russia has alleged that US and its allies have “bombed” the UN supported Syria peace talks in Geneva by their recent airstrikes on April 14 on targets in Syria.

Moscow considers it to be a major setback to the chances of peace.

Russian Foreign Minister Sergei Lavrov, while addressing a joint press conference with UN special envoy on Syria Staffan de Mistura in Moscow on Friday, said that US and its allies “bombed” not only made up chemical sites in Syria but also bombed the (UN-backed peace) talks in Geneva by their recent military strikes.

Lavrov further noted, “We came very close to a re-launching of the Geneva process with a real dialogue between Syrians, mainly on the question of constitutional reform.”

Lavrov further said, “Today we are meeting in the conditions when the prospects of the quickest start of the dialogue under your aegis in compliance with Resolution 2254 are not as optimistic as they were a month ago. Nevertheless, we should not give up and we will do everything to avoid departure from the key accords.”

“The main thing is to stay within the framework of international law and we will be seeking that all our partners should follow precisely this course rather than try to play their geopolitical schemes to the detriment of the interests of the Syrian people,” the Russian foreign minister said.

De Mistura, who also met Russian Defense Minister Sergei Shoigu, said the UN’s priority was to “lower the temperature” following the tripartite attacks.  “I am very pleased to hear… that in spite of what happened last week and it is still very recent, there is a strong commitment from the Russian Federation to push for the political process,” he said.

“It is important we turn the page on this alleged chemical attack because we need to go back to the basics,” he noted.

Russian officials say the tripartite Western attacks hit Syria right at the moment the country had a chance to have a peaceful future. The Syrian government and several opposition groups are involved in an ongoing political process mediated by Russia, Iran and Turkey in Astana, Kazakhstan.

The talks have led to the formation of four de-escalation zones across Syria and helped significantly reduce violence in the country. Terrorists belonging Daesh (IS), Jaish al-Islam and other armed groups were being transferred to some of these areas from Eastern Ghouta and other terror-infected areas.

According to reports the Astana have been going on in tandem with another series of talks held in Geneva and brokered by the UN. Previous rounds of negotiations under the auspices of the UN over the past five years have failed to achieve tangible results.

Read More: Trump was to hit Russian and Iranian targets in Syria

On April 14, the US, France and the UK carried out missile attacks on a number of targets in Syria in response to a suspected chemical attack in Douma near Damascus which was reportedly taken place on April 7. Syria has rejected any role in the alleged attack, which is yet to be investigated.