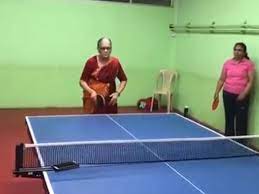 The lady in a viral video is identified as Saraswathi Rao who is a former national table tennis champion from India and has proved that a person’s age doesn’t define his/her powers. Age is just a number. It is about the experience as the 69-year-old grandmother, who was once ranked second in the country, still has it in her when it comes to delivering powerful smashes with the racquet in her hand. The video is a proof of this.

The video, which was released five years ago, is from a veteran competition where Rao is shown surprising her younger opponents. The viral video has attracted a lot of attention on social media, much like in 2017. Viewers have been encouraged by Rao’s defiance of age norms.

In the video, the 69-year-old former Indian table tennis player Saraswathi Rao can be seen dominating younger opponents in the match, and the video of the match went viral at that time only. It had more than 3 million views in the year 2017.

And now, again the video is getting viral. Her willingness to play table tennis like an ultimate master has captivated the internet’s attention.

Even in the footage, we can hear and watch the audience members’ responses to the 69-year-old player’s serves and returns as they watch her play in wonder. When you see Rao play so many years after she represented India at the pinnacle of her career, the many varied talents of the game, from reflexes to accuracy, position, and synchronization, all seem to be of the highest calibre. 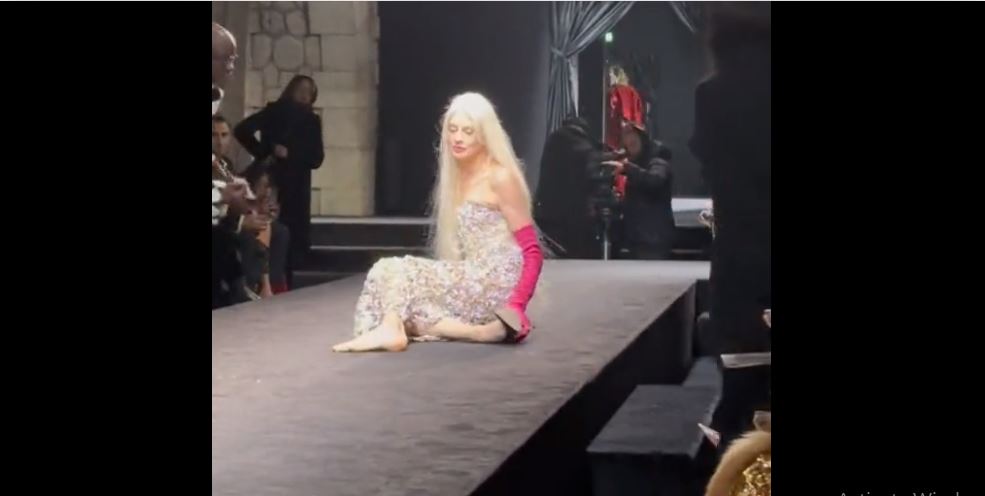 A video is doing rounds on social media platforms, where a famous model was seen perfectly walking on the ramp, things were cool but in a fraction of a second, her heels got twisted and she lost her balance and fell on it. However, the model collected herself maritally and walks again. Her confidence left the audience speechless,

The incident has been reported from the Valentino spring fashion show, which was held in Paris where an an American supermodel Kristen McMenamy falls on the floor.

The clip has been shared by an internet user named Michealla on Twitter. She also captioned the post where she wrote that it’s like every season Valentino has an issue with their heels.

Take a look at the viral video of model falling on the ramp.

In the video, it can be seen that McMenamy was wearing a cream outfit, pairing it with long pink gloves and high heels, and walking on the ramp. As the clip moves further, in order to take the turn on the ramp, the model’s heel got twisted due to which she lost her balance. Seeing her falling on the ground, many guests also were seen offering her help, but the 58-year-old model refused any and gets up by herself and walks again with her shaking feet.

Ever since the incident footage was shared on the internet, it garnered a lot of views, likes and share in no time. Many users also rushed in the comment section to share their views about the same.

One of the users commented that why the designer always takes models as props, why they can not give them a normal sandles or wearables to walk on the ramp, or if is it a publicity stunt. Another user commented that the fashion industry itself is a disaster. While the third user slammed the whole fashion show and asked the foreign government to take action against them.

A shocking car accident has come into the limelight, where a sedan got crushed under a truck on a highway in order to overtake the vehicle. It is not confirmed yet from where which highway, and which country the video has been generated, but the horrific scene went viral on all social media platforms.

A page named Oddly Terrifying Things has shared the video on Twitter. Without revealing any details about the incident, the page simply put a shocking face emoticon as their caption.

look at the viral car accident on highway

In the video, it can be seen that a car moving in its own lane, then all of a sudden a red colour sedan tries to overtake both car and truck on the road. In order to do so, the four-wheeler insanely gets stuck between both vehicles and meets with a horrific accident. As the clip moves ahead, it also showed the car getting stuck with the truck, while the big vehicle was seen dragging the car on the road for so long.

Ever since the footage was shared on the internet, it garnered thousands of views, likes and reshare in no time. Many social media users also bombarded the comment section in order to share their views about the same.

One of the users wrote that people should understand that the roads or highways are not for ego, they should drive vehicles like a human. Another user commented that overtaking is such as risk on the highway, drivers need to avoid it as much as they can, especially from big vehicles. While the third user prayed for the rider’s life.

This is not the first time such a clip grabbed the eyeballs on the internet. Earlier, a similar incident has been reported from India, where a motorcyclist met with a horrific accident in order to overtake a truck on the highway.